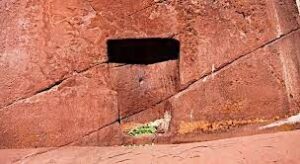 Mysterious Places can be found around the Earth, an ancient doorway carved into a sheer rock wall in Peru’s Puerta de Hayu Marka — the Doorway of the Amaru Muru is said to be a portal to other worlds. Markawasi’s plateau is filled with strange rock formations allegedly left behind by an ancient advanced civilization. ~ Kathy Doore

Sometimes the mystic has no agenda other than to experience the sacred and higher consciousness.  Thus the mystic continually experiences the sacred and touches the face of God on a daily basis.  Portals are also a daily event in the life of a mystic.  The initiated mystic knows how to make a portal safe.

Secrets of the divine spark (the seed of the Soul within the Heart) unfold and may be experienced in a numbers of different ways, i.e., as awareness of higher consciousnesses or experiences,i.e., health, love, beauty, abundance, magnificent reality and time travel.  The mystic experiences life on a deep level where things are not as they seem on the surface.

The movie Interstellar shows a journey through a black hole onto a planet in which a “time loop” lasted almost 30 years, thus robbing the astronauts of “valuable time”.

In this situation, the initiated mystic would look at the velocity, vibration and other variables to reveal a divine plan or bigger picture involving circumventing time, thus time is no longer an issue. ~ Cariel Quinley

According to Kathy Doore:

“In Secret of the Andes by Brother Philip, (as channeled by author/contactee, George Hunt Williamson, “Road in the Sky” — Markawasi), one Incan priest of the Temple of the Seven Rays named Amaru Meru (Lord Meru, Aramu Muru) fled from his temple with a sacred golden disk known as “the key of the gods of the seven rays”, and hid in the mountains of Hayu Marca.

He eventually came upon the doorway which was being watched by shamen priests. He showed them the key of the gods and a ritual was performed with the conclusion of a magical occurrence initiated by the golden disk which opened the portal, and according to the legend blue light did emanate from a tunnel inside.

The priest Amaru Meru handed the golden disk to the shamen and then passed through the portal “never to be seen again”. Archeologists have observed a small hand sized circular depression on the right hand side of the small entranceway, and have theorized that this is where a small disk could be placed and held by the rock.

According to some individuals who have lain their hands on the small door, a feeling of energy flowing has been commented on as well as strange experiences such as visions of stars, columns of fire, and the sounds of unusual rhythmic music. Others have said that they have perceived tunnels on the interior of the structure …

… five other archeological sites which link together a cross by imaginary straight lines crossing each other exactly at the point where the plateau and Lake Titicaca are located.”

Note that door is same shape as Puma Punku in Tiahuanaco, Bolivia, below.  It is believed the technology used to cut these stones was extraterrestrial in origin. 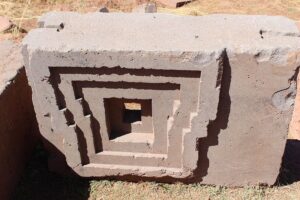 “Markawasi is the true account of an ancient lost humanity of mysterious origin whose hidden legacy carved gigantic, towering stone monuments, pointing to a message with predictions for the future. In this beautifully-illustrated, award-winning coffee table book by author Kathy Doore, readers will be carried on a journey of self-discovery through one of the most mystical and breathtaking places on earth, the stone forest of Markawasi. First discovered in Peru in 1952 and soaring 12,000 feet above the Pacific coast on the western-most ridge of the Peruvian Andes, Markawasi was virtually unknown to the English-speaking world a decade ago.

In this first-ever definitive work on Peru’s stone forest, readers will come to understand Markawasi’s pivotal role as a repository of ancient knowledge, and learn how a simple change in one’s perspective can open an entirely new chapter in the way human history is perceived. More than a traditional guidebook, Markawasi is a powerful handbook, facilitating the traveler intent upon achieving an intimate and transformational experience.

Contributing their thoughts on the enigma of Markawasi are a group of notable experts including Boston University professor of geology and geophysics, Robert M. Schoch best known for his re-dating of the Great Sphinx of Egypt, Machu Picchu archaeologist, Marino Sanchez, and Lima artist, Javier Ruzo, who comments on his grandfathers legacy. Journalist, Lisa Rome, contributes an historical retrospective, while Peter E. Schneider and Sean Adair provide stunning photography. A collection of personal memoirs, illuminating the deeper mysteries surrounding the enigma of Markawasi are prominently featured.

Describing her own personal journey of discovery, author Doore weaves the cultural, historical, and often magical lore associated with the ancient Peruvian mesa into an incredible tapestry of dazzling images, illustrations, and walking maps. In addition to over 400 illustrations, maps, and color photos, are travel tips, a camping guide, and advice on high-altitude travel. There is much more to the mystery of Markawasi then just beautiful rocks.”

The Divine SOUL AWAKENING is occurring on the planet. A gateway is opening and many are graduating after many lifetimes of Earth’s 3rd dimensional classroom. You’ll know what your part is in supporting HMHS who has been helping consciousness prepare for a leap to a magnificent reality.

In accordance with Source and for the highest good of all, HMHS clears the old reality and prepares for a new magnificent reality.

Be aware of love and light and the magnificent reality.

Sending Much Love, Healing and Wisdom